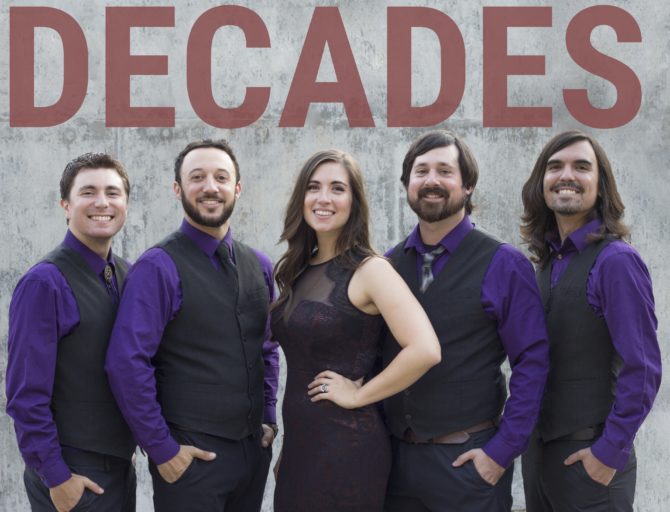 Since 2010, Decades (based in Chico, CA) has been working (and rocking) around the clock to learn material spanning from the 1940’s (Glenn Miller’s Orchestra’s “In The Mood”) to today (Bruno Mars & Mark Ronson’s “Uptown Funk”). The band has played over 700 shows all along the West Coast, earning its place as one of California’s most in-demand bands. Throughout a single show, they’ll swap between several instruments (including saxophone, harmonica, penny whistle, ocarina to name a few) and belt out four-part harmonies, showcasing each members’ musical versatility, while continuing to put on a highly energetic live show.
Decades’ impressive catalog, mixed with its young talents (ages 28-31), has led to numerous achievements and highlights. Some notable performances include playing the Great American Music Hall in San Francisco in 2016, the Francis Ford Coppola Winery, four events for the Oakland Raiders, Santa Cruz beach shows, the Hawaiian islands for 4 consecutive years, a 4th of July rooftop show at Harrah’s Casino in Lake Tahoe and opening for both “Rain: A Tribute to the Beatles” and “The Drifters”. Ben Slaught, Entertainment Director of Cache Creek Casino says of the band, “Decades is one of the best fits for our wide demographic and you all are true professionals to work with. Keep up the good work.”