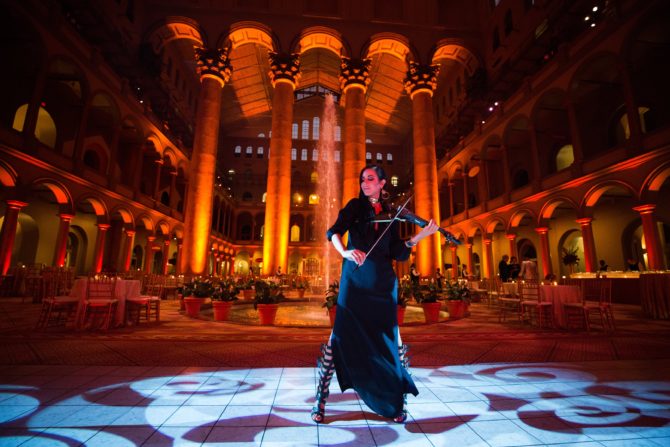 Electric Violinist, Spags, is a master at creatively merging the classical violin world with the modern music world! Her unique artistry keeps her in demand throughout the United States, as well as internationally, where she can be heard amazing audiences with her virtuosic technique, inventive arrangements, and compelling performance style! She literally plays all styles of music and can seamlessly jump from Dr. Dre to Frank Sinatra without skipping a beat. Her natural ability to weave all genres across all eras allows her to connect with audiences of all shapes and sizes.
Some of her recent highlights include personal performances for Magic Johnson, Mitt Romney, Jenny Craig, Tony Gonzalez, and Jerry Jones of the Dallas Cowboys, to name a few. She has toured with rock legend Dee Snider of the band Twisted Sister as well as Latin piano sensation Raul di Blasio and performed as the opening act for many top artists, including Steve Vai, Foreigner and the band FUN. Spags has been featured on NBC Nightly News, LA Talk Live, KUSI Morning Show, U-T TV San Diego, San Diego Living, and has performed on several prime time drama series, including ABC’s “Dirty Sexy Money” and “What About Brian”, as well as NBC’s “Chuck”. She has also traveled the world, on three overseas tours, performing for our troops!
Keeping a steady finger on the pulse of current trends, and consistently raising the bar for industry standards, Spags continues to rise to the forefront of the music industry, where she can be heard bowing her way into the hearts and souls of those around her.